skip to main | skip to sidebar

Feeling a little confused about The Food Safety and Modernization Act (S. 510) ? Check out this discussion on Grist, with well-articulated views from people both for and again. (Note: this article was posted a few days ago; S. 510 has since passed the Senate.)

An uplifting story from NPR about farmers in Malawai diversifying their planting, and improving their health as a result. However, a little disconcerting footnote at the end from the agricultural economist who wants instead to help the farmers grow "more corn on each acre." I suspect that his plan may include GMOs...

You can have this Pop-Tart when you pry it out of my cold, dead hands! How the focus on healthy eating is viewed by some as cultural warfare (in the Washington Post).

A federal judge ordered the destruction of GMO sugar beets after they were planted illegally. Earthjustice and the Center for Food Safety successfully argued that farmers and consumers would likely suffer harm from cross-contamination between the genetically modified and non-genetically modified crops. Hooray!

Homesteading makes the "Money" section of U.S. News & World Report! A sweet little article on "How to Become a Modern Homesteader."

Want to know if there's a factory farm near you? Check out this Factory Farm Map.
Posted by Sundari Elizabeth at 12:24 PM

The Factory Farm Map is frightening! Mostly extreme and it looks like nearly all farmable land is factory-farmed.

In Colorado, that is. 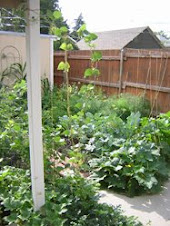